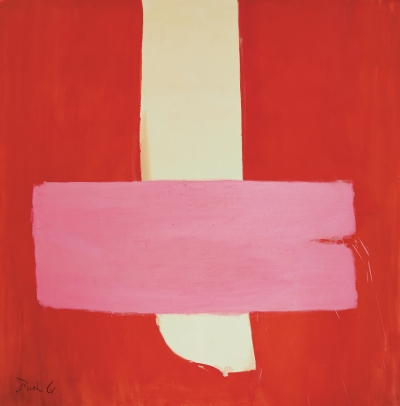 “Jack Bush stands as a rarity in Canadian art – a painter whose work is actively pursued by passionate collectors not only across Canada but also in the United States and internationally,” said Rob Cowley, President of Consignor Canadian Fine Art.

Managing Director Lydia Abbott adds, “We continue to acquire significant and exceptional works of art, as demonstrated by the Bush paintings and the distinguished corporate collection of contemporary artwork; and make these available for auction to both seasoned collectors and novice art lovers who are looking to build a collection via an accessible and pressure-free online environment.”

Bush’s artwork, excitedly pursued for decades within the Canadian auction industry, grabbed headlines last summer when four canvases by the painter sold exponentially higher than estimated at a major New York auction. Pink on Red – Thrust (1961) is being offered with a pre-sale auction estimate of $175,000 – 225,000; Summer Lake (1973) will be offered with an estimate of $100,000 – $150,000.

Media Note: High-resolution images of artwork featured in the spring auction catalogue are also available to media upon request. Consignor’s semi-annual spring auction can be viewed in its entirety at www.consignor.ca.  A print catalogue featuring the majority of lots on offer is available for sale, and live previews will be held throughout the month of May (Monday to Saturday) at the Consignor Canadian Fine Art Gallery located at 326 Dundas Street West.  Previous works sold at auction through Consignor Canadian Fine Art include paintings by Tom Thomson, Maud Lewis, Joe Fafard and A.J. Casson that attracted international buyers from across Canada, the United States and Asia.

Additional works of art from the newly acquired corporate collection will be featured in Consignor’s June Auction of Canadian and International Art (with bidding open between June 19 – 25).
Visit consignor.ca for upcoming auction schedules.

Consignor Canadian Fine Art is a partnership between art auction veterans Rob Cowley, Lydia Abbott and Ryan Mayberry (Partner at Mayberry Fine Art and Founder of Consignor.ca). Cowley and Abbott became principals in the new venture with Ryan Mayberry, taking Consignor.ca from its original form, as a branch of Mayberry Fine Art, to a separate company focusing on auctions of Canadian art.