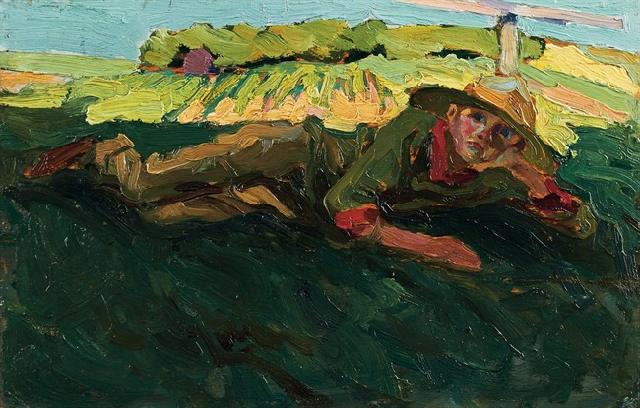 TORONTO (For Immediate Release) – A rare 100-year-old portrait by Tom Thomson is going up for auction online.  Consignor Canadian Fine Art says Daydreaming is a portrait of artist Thoreau MacDonald, the son of Group of Seven member J.E.H. MacDonald.  The auction house dates the work to sometime between 1913-1915, a few years before Thomson’s untimely death in 1917.  Consignor says “Daydreaming” represents a rare portrait by Thomson, who is best known for painting landscapes of northern Ontario. It estimates the work could fetch between $200,000 and $250,000.

The work will be on sale at consignor.ca between Nov. 20 and 29, as part of Consignor’s inaugural semi-annual auction of Important Canadian Art.

Other pieces up for auction include an early Ontario landscape by Thomson, a 1957 canvas by Painters Eleven artist William Ronald, a 1925 watercolour by Group of Seven member Franklin Carmichael, an 1860 portrait by Cornelius Krieghoff and a complete set of lithographs by Jean Paul Riopelle.

“We’re thrilled to have acquired such an important historical work by Thomson, one of the rarest I’ve encountered in many years as a Canadian art specialist,” Rob Cowley, president of Consignor Canadian Fine Art, said Wednesday in a statement.

The auction can be viewed at www.consignor.ca. Live previews will be held between Nov. 1 to 29 in Toronto.

Note to readers: This is a corrected story. A previous version included incorrect information from the auction house saying that the Thomson painting had never been up for auction before.

By: The Ottawa Citizen