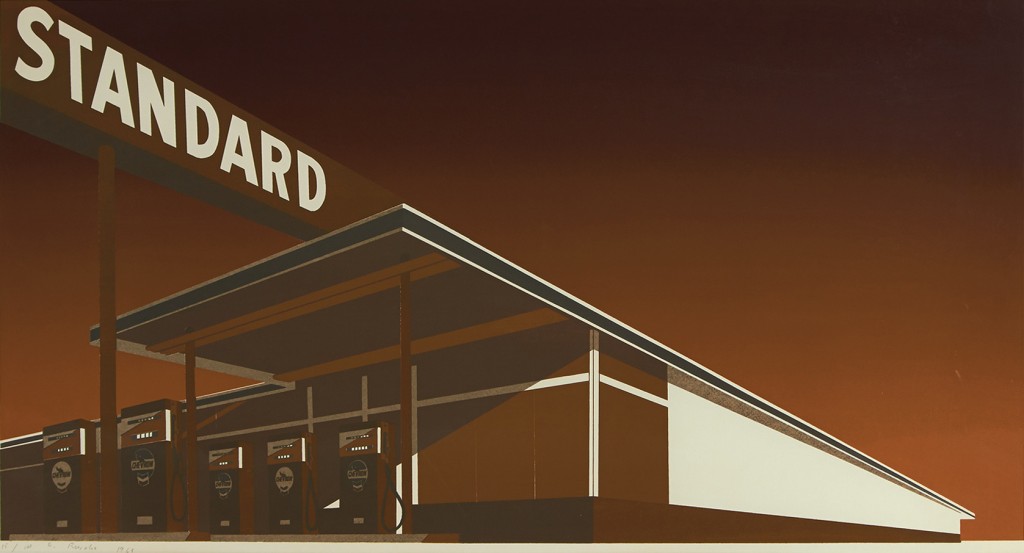 Canadian works of art presented in the auction include a magnificent Saskatchewan landscape by celebrated painter Takao Tanabe. The Land 3/79 (North of Regina) is expected to fetch between $15,000 and 20,000. The 1979 painting presents the low horizon and seemingly endless Prairie sky encountered in many of Tanabe’s actively-sought works of art. Otto Rogers’ work is included in significant collections across Canada and abroad including the Art Gallery of Ontario, Montreal Museum of Fine Arts and the National Gallery of Canada. Light Above, a s

ixty by sixty inch 1979 acrylic on canvas by the Saskatchewan painter is being offered with an estimate of $7,000-9,000. Further Canadian artists featured in the June auction include Walter Bachinski, David Blackwood, David Craven, Ken Danby, Joseph Drapell, Gathie Falk, Douglas Haynes, Pudlo Pudlat and Chris Temple among others.

After Mocha Standard first appeared in Nebraska artist Edward Ruscha’s 1964 book Twenty-Six Gasoline Station, the image was transformed into a masterpiece of American painting. Part of a series featuring John D. Rockefeller’s ubiquitous Standard Oil stations, Mocha Standard depicts Standard Station of Armarillo, Texas, and is now arguably Ruscha’s most iconic image. The 1969 colour screenprint is estimated to sell between $40,000 and $60,000. A Canadian touring exhibition of Dutch painter Karel Appel’s work was a collaborative effort between the artist and Pall Mall Canada Limited between April 1972 and July 1973, the exhibition making nine stops across the country. “The Apples of Appel’s Eyes” featured a selection of Appel’s personal favourite works as well as new work created specifically for the exhibition. Consigned by Rothman’s, Benson and Hedges Inc., Self-Portrait is recorded as a gift from the artist to the corporation, the gouache and collage’s 1971 creation occurring in the period leading to the touring show. Self-Portrait is being offered with an auction estimate of $15,000 to 20,000. Further selections in the June auction from International artists include works from Jean Dufy and Stanley Boxer.

Bidding for the online auction is open until Wednesday, June 25th (when bidding will begin to close starting at 2:00 pm EDT). Live previews in Consignor’s Toronto gallery space, located at 326 Dundas Street West, continue between 9:00 am and 5:00 pm from Monday to Friday and 10:00 am to 4:00 pm on Saturday, June 21st.